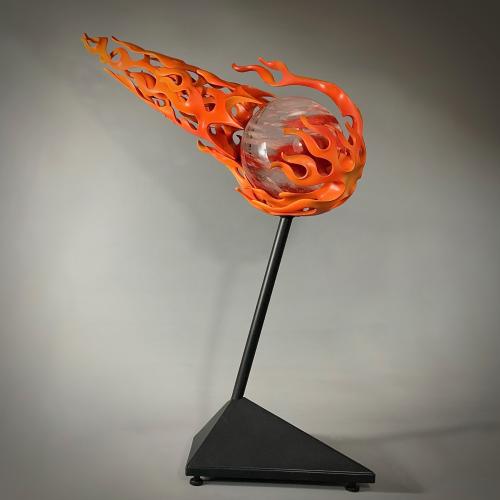 “I see myself as a huge fiery comet, a shooting star. Everyone stops, points up and gasps Oh look at that! Then – whoosh, and I’m gone… and they’ll never see anything like it again… and they won’t be able to forget me – ever”
Jim Morrison

I started this piece in 2017 – full of over-ambition, and way out of my depth. I had had such a strong vision of the finished piece, and knew it just had to be made. Four years later it was finally completed, much to the relief of my family, who, at many times, were convinced it would forever remain an abandoned and half-finished mess.

This piece consists of just four separate carved and painted wooden sections, which, once assembled, enclose a large sphere of smelted quartz and an LED light source to bring it to life. As is often the case with my work, this is a study in motion rather than an accurate portrayal of a flaming space-ball or a piece with a moral or message. The organic shapes used in the representation of the flames are deliberately stretched out, the colour is imperceptibly lighter at the pointy end and darker on the internal surfaces,  and the way the whole is mounted at an angle on the canted and pyramidal base all adds to the impression of a strong direction of travel.

While this piece might not have a great deal to say, it remains an extraordinary and unique object, and is one that has given me great pleasure (and not a little grief) to bring into being.