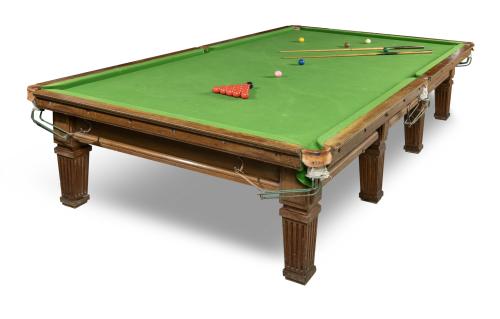 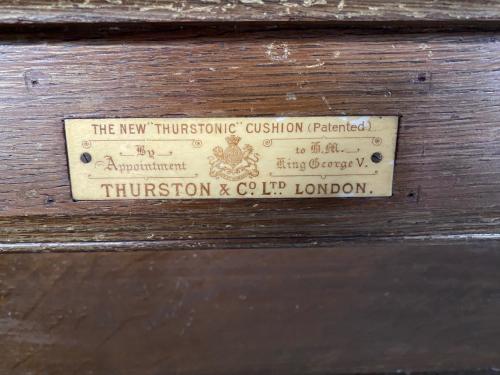 Provenance; Removed from Admiralty Arch, Whitehall. This iconic London building at the opposite end of the Mall to Buckingham Palace was  commissioned by King Edward VII in memory of his mother, Queen Victoria, and designed by Aston Webb. Completed in 1912, in the past, it served as residence of the First Sea Lord and was used by the Admiralty.  Until 2011, the building housed government offices. In 2012, the government sold the building on a 125-year lease for £60m for a proposed redevelopment into a Waldorf Astoria luxury hotel and four apartments.

The firm of Thurston and Co was established in 1799 and have been leading manufacturers of snooker and billiard tables since as well as being granted four consecutive Royal Warrants from William IV to George V. The company still holds records of all the tables made and have confirmed that this table was made in 1913 but that unlike virtually every other table made, the name of the purchaser is blank in their records. One can only assume that since it was made for the residence of the First Sea lord at Admiralty Arch, there was a degree of secrecy involved.

When it was installed, the First Sea lord between 1912-1914 was Prince Louis of Mountbatten, father of Earl Mountbatten who held the same appointment from 1955-1959.  The roll call of First Sea Lords during the 20th century encompasses many well known historical figures and one can only speculate who else may have played on this table.