Previous
Back to catalogue
Next
Important Notice
Summers Place Live is our new auction platform - register through www.summersplaceauctions.com to live bid.
No surcharge (standard BP and VAT apply), leave absentee bids, and view your account
*****Payments by bank transfer only ****** 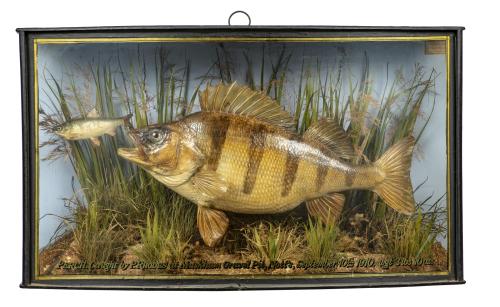 A stuffed perch by Cooper

The business that became known as Cooper and Sons is the most famous name in the history of fish taxidermy and is recognised throughout the world. The company lasted for over 100 years. In fact there were three Coopers. The first, and founder of the company, was John Cooper (1807 -1872). At his death in 1872, what had become something of a family concern, was taken on by his son, also named John (1840 - 1916). Due to the continuing high standards of the specimens the company produced, it flourished. At the death of the second John his own sons continued to run the business, but the effects of World War I led to a decline in business opportunities and the firm began to flounder, eventually being taken over by William Griggs.

All these fish (lots 1- 68) come from the celebrated collection which for many years decorated the famous Flowerpot Inn near Henley. This inn was a mecca for those interested in fishing as it was situated just a few yards from a beautiful stretch of the River Thames and contained a very extensive collection of preserved fish trophies. Those interested, can find a variety of videos on YouTube by searching for The Flowerpot near Henley. Two of the most informative videos featuring the collection are:  https://youtu.be/dmcjQ1xF2Es and https://www.youtube.com/watch?v=B6a4hnsDoPM